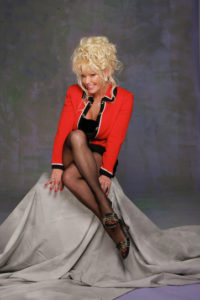 “Air Force Amy”  is a highly decorated disabled veteran of the USAF. She finished out her military career with the USAF at Nellis Air Force Base just North of Las Vegas, Nevada with an Honorable Discharge in 1990 and she immediately launched her new career as a legal courtesan at The Famed Chicken Ranch Brothel in Pahrump, NV.

She toiled at all the major-player brothels for ten years before hooking up with Dennis Hof, late proprietor of the Moonlite Bunny Ranch, where she’s an 11-time “Bunny of the Year” recipient and the #1 earner of all time.

Amy reached stardom thanks to her appearances on Hof’s highly-acclaimed reality TV series, “Cathouse.” And her “Cathouse” fame led to a flood of mainstream radio, TV, magazine and newspaper interviews which, in turn, made “Air Force Amy” a household name.

With nearly thirty years experience as a legal courtesan in Nevada, Amy can be relied upon to relate many first hand historical truths about modern-era Nevada legal brothels.

Among many certificates of completion and college degrees, Amy has associate’s degrees in Sex Education and Criminal Justice, a certificate in Clinical Sexology and a doctorate degree in Education, specializing in Human Sexuality.  She is also a former faculty member at the Institute for Advanced Studies of Human Sexuality in San Francisco.

Air Force Amy has remained a Nevada resident throughout her career, minus two years in the early 1990’s. She is a Lyon County homeowner for nearly 20 years.  She participates in her community, donates extensively and she incurs all costs for an annual charitable children’s Christmas Party she hosts at her home.

Air Force Amy is a survivor of  and champions the causes of  abused women, missing and exploited children, US military veterans, mental illness, substance and alcohol abuse and, of course, the future of the Legal Brothels in  Nevada.

Air Force Amy is a single woman in her early fifties.  She dedicates all her time to her work, her neighbors, her clients, her coworkers, her education and her causes.  She has traveled the world and loves to attend the local events Nevada has to offer.  Amy likes the bright lights and shows of the casinos as well as four wheeling, hiking, ATV and horse back riding in the Nevada countryside.