(Chuck Muth) – As per the Nevada Legislature’s Standing Rule #14.3.1, Republican State Sen. Joe Hardy’s bill (SB413) to ban Nevada’s legal brothels statewide died on Friday after it failed to get a committee hearing by the midnight deadline.

Cause for optimism, but not celebration…yet.  As Yogi Berra famously put it, it ain’t over ‘til it’s over.

And as longtime watchers of the Legislature know, “dead” bills can become “zombie” bills that come back to life as amendments to other bills right up until the time the Legislature officially comes to an end (“sine die”) several weeks from now.

The Associated Press reported this weekend that Hardy “had argued brothels had no place in the state” while “Brothel backers argue a ban would hurt struggling rural economies and push sex workers into dangerous street prostitution.”

Brothel supporters have won the argument…for now.  But we’ll remain vigilant and let you know if SB413 somehow joins the walking dead.

In the meantime, Assemblywoman Lesley Cohen’s bill (ACR6) to create a legislative study committee to look into the business operations of Nevada’s legal brothels successfully made it out of committee before the deadline and has moved into the next round – a vote on the floor of the state Assembly. 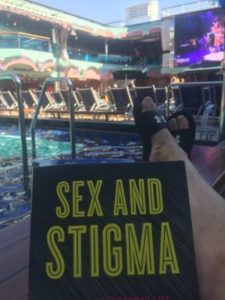 The bill itself doesn’t specifically outline exactly what Ms. Cohen wishes to study; however, in testimony during a hearing on ACR6 last month, the assemblywoman did reference, generally, certain business practices as outlined in a new book titled “Sex and Stigma” by a trio of UNR researchers.

So I picked up a copy and read it on the Lido Deck during my organization’s annual Mexican Riviera cruise last week.  And I think I now see where the assemblywoman is going.

The researchers note that some legally questionable “police rules” exist in some localities where brothels are legally allowed to operate.  And before commercial sex workers are issued a work permit, they are required to sign a document agreeing to follow a list of various “regulations for prostitutes.”

The authors cite, as an example, Rule #6 for the town of Carlin that only allows the ladies from the brothels “to dine in restaurants and to conduct personal business and shopping in Carlin between the hours of 7:00 am and 7:00 pm.”

The rule goes on to say that “Prostitutes shall not be absent from their place of employment between 7:00 pm and 7:00 am.”

These government-mandated restrictions are what those in the industry call “lockdown” rules.

Not exactly the definition of “freedom.”

The researchers also note that Nye County and the City of Elko “both mandate that any prostitute who leaves the premises for longer than twenty-four hours must undergo all medical testing before being allowed to work again.”

That government-imposed restriction is, indeed, a head-scratcher.

If a working girl is off the premises for 23 hours and 59 minutes…no problem.  But if she’s off property for one minute longer THAT somehow poses a public health risk?  How?  Especially since condom use is mandatory in all interactions.

It seems to me that concerns over certain local and/or county rules and regulations could and should be better addressed directly by Ms. Cohen and local elected officials and county commissioners without a full-blown, two-year, taxpayer-funded legislative “study” committee.

On the other hand, if there is to be such a commission formed, it also seems to me the scope of the study should be expanded to include the working conditions for commercial sex workers in both the legal brothels AND the currently-illegal markets…as recommended in a statement by the Nevada Brothel Association presented by commercial sex worker Ruby Rae at the ACR6 hearing last month.

If we’re going to do this thing, let’s do it right.

There’s still time to amend Ms. Cohen’s bill to do a more thorough and comprehensive study of Nevada’s entire commercial sex industry – either as a floor amendment in the Assembly or once it reaches the state Senate.

More on this in the coming days.  In the meantime, we can at least be grateful that Sen. Hardy’s brothel-killer bill is dead…for now.